-- Terra Drone is the first Asian startup to raise funding from Wa'ed Ventures, the venture capital of the 2nd biggest company in the world by market cap, Aramco -- The company will establish a new subsidiary for its operations in Saudi Arabia to conduct drone survey, inspection and unmanned traffic management (UTM) in Saudi Arabia TOKYO, Jan. 25, 2023 /PRNewswire/ -- Terra Drone Corporation, a leading drone and Urban Air Mobility (UAM) technology provider, has raised $14 million in funding from Wa'ed Ventures, the venture capital arm of the biggest oil producer in the world, Aramco. With this financing, Terra Drone will set up a new subsidiary in the Kingdom of Saudi Arabia, Terra Drone Arabia, in line with the Saudi government's "Vision 2030." 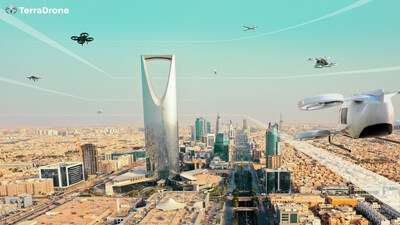 First announced in 2016, the Vision 2030 reform plan aims to stimulate economic transformation in Saudi Arabia by reducing the country's dependence on hydrocarbons. Technology is at the heart of this initiative and the Saudi government is focusing its efforts to promote the use of drones in services such as asset inspections.

Wa'ed Ventures was founded in 2013 and specializes in fostering innovation by investing in startups to develop the Saudi Arabian economy. This is the first time Wa'ed Ventures is investing in an Asian startup, which is a testament to Terra Drone's vision, state-of-the-art digital solutions, and cutting-edge drone technologies. Terra Drone will support a new subsidiary by taking advantage of whole business experiences of Terra Drone in Global, No.1 drone solution provider in the world in the fields of survey, inspection and unmanned traffic management (UTM).

With the establishment of Terra Drone Arabia. Terra drone will provide oil-gas inspection services, The new subsidiary will also help Terra Drone, which is counted among the top two drone service providers in the world, to further its expansion globally. At present, Terra Drone provides drone and UAM solutions in 10 countries across the world.

Unifly is the leading UTM technology provider in the world, having strong presence in Europe and North America. Terra Drone is the largest shareholder of Unifly.

The new subsidiary Terra Drone Arabia will further promote drone inspections to support the Saudi economy, ensure safe and efficient UAM in the country, and invest in the growth of both verticals. Carbon footprint reporting and reduction made easy with Plan Be Eco

-- Plusgrade takes another step forward in becoming the global ancillary revenue powerhouse, by expanding its portfolio further in the thriving hospitality industry -- Acquisition strengthens Plusgrade's unmatched scale across five verticals of the global travel industry -- Plusgrade now expects to generate over US$5 billion in new revenue opportunities for its partners through 2023 MONTREAL, Jan. 31, 2023 /PRNewswire/ -- Plusgrade, the leading p
50 minuten geleden

Postcards From The Edge